in Pagani
A A
ShareTweetPinSendShareSend

Pagani has revealed the new Huayra Tricolore, a new very limited edition of the Italian hypercar that pays tribute to the 60th anniversary of Italy’s Frecce Tricolori, the world’s largest aerobatics patrol.

Would You Splash The Cash On This Green Pagani Huayra BC? | Carscoops

This isn’t the first time Pagani honors the Italian Air Force Aerobatic Team, as they did the same back in 2010, at the team’s 50th anniversary with the Zonda Tricolore.

Like its predecessor, the new Pagani Huayra Tricolore will be built in just three examples, each priced at 5.5 million euros ($6.7 million) before taxes. 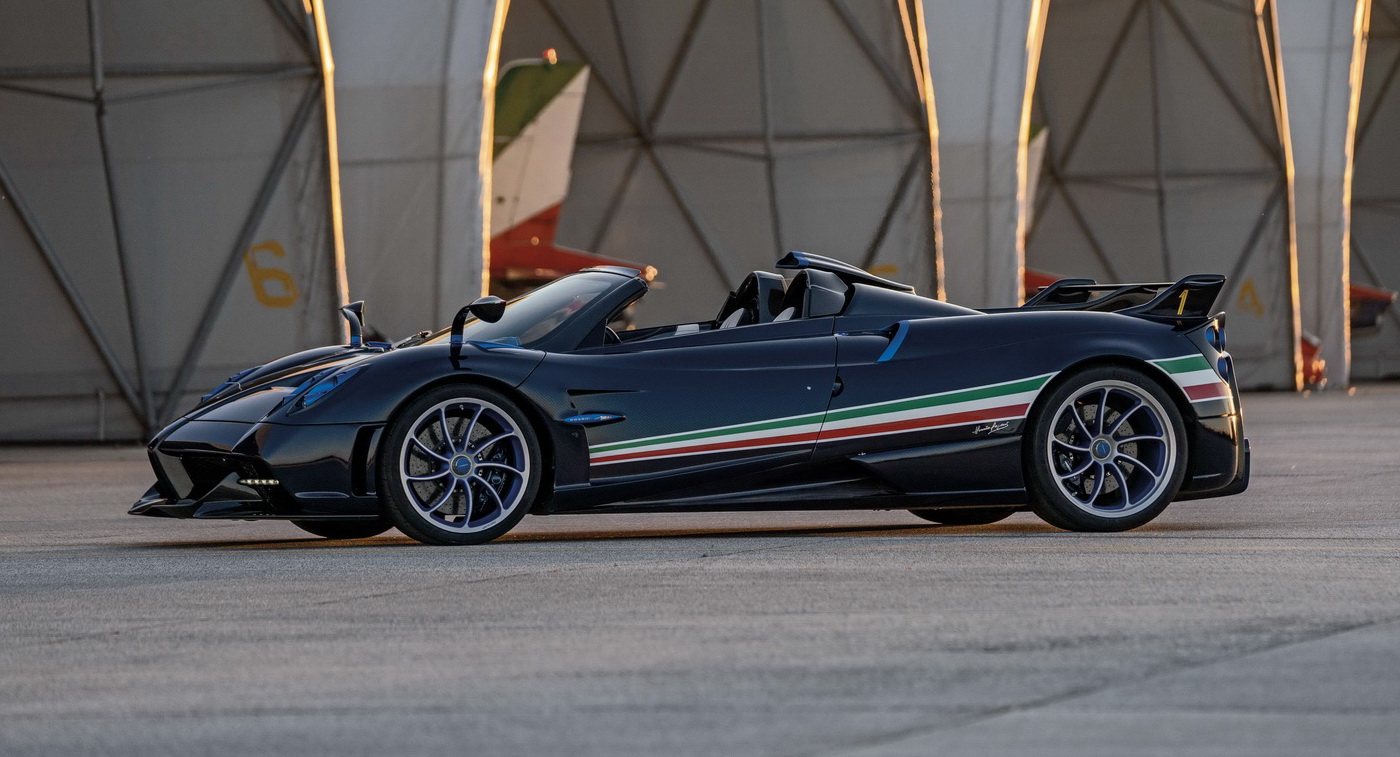 The latest special edition of the Pagani Huayra features new bodywork that’s inspired by the Frecce Tricolori’s jet aircraft, the Aermacchi MB-339A P.A.N. Focusing on aerodynamics, the new Huayra Tricolore features a more pronounced front splitter with a completely new aerodynamic profile for maximum downforce that works together with a new front bumper with side extractors designed to maximize the efficiency of the intercooler.

There’s also a new air scoop that allows even greater airflow of cold air directly into the biturbo V12 engine. The rear diffuser has also been further optimized while the new wing is fully integrated to the rear clamshell and helps in achieving perfect aerodynamic balance, compensating for the increased downforce upfront.

Speaking of the rear wing, its supports have a similar shape with the tail fin of the team’s jets and display the number of the car on their outer sides in a similar fashion with the patrol aircraft.

The highlight of the new limited Pagani however is to be found in the center of the front hood, where there a Pitot tube, the instrument used by aircrafts to measure the macroscopic air speed and determine their aerodynamic condition.

Being an aviation-inspired model, the new Pagani Huayra Tricolore is finished in a special livery, featuring the tricolor running along the sides of the car “like an impetuous engulfing flow of air”. The graphic extends up to the rear light clusters and is matched with a translucent blue carbon color.

There’s also a new set of alloy wheels with a turbine design, new anodized aluminum frames for the side air intakes, and headlights machined from billet. 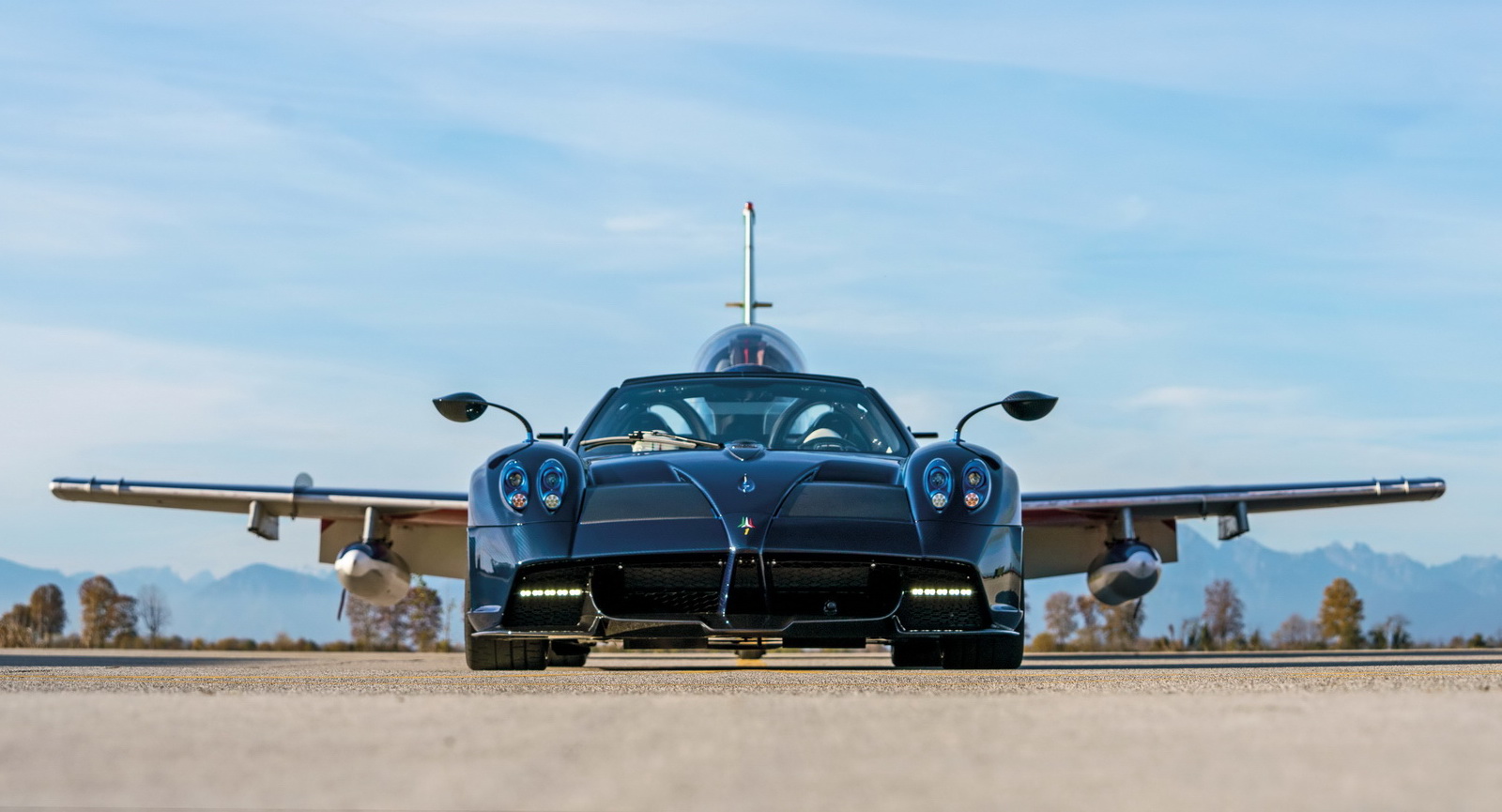 The latest version of the Mercedes-sourced twin-turbo V12 engine produces 828 HP (840 PS) and 811 lb-ft (1,100 Nm) of torque, paired to a seven-speed sequential transmission with an electromechanical differential. The chassis is made out of Pagani’s Carbo-Titanium and Carbo-Triax, which introduced a significant improvement in rigidity while the suspension geometry, the electronically controlled dampers, and the active aerodynamics ensure that the Huayra will perform exceptionally under any conditions.

The interior of the Pagani Huayra remains one of the most special environments in the business and the new Tricolore makes it even more special; all the aluminum parts are made out of aerospace-grade alloys and machined from billet before being anodized in their distinctive blue color. The seats are dressed in an exclusive two-tone white and blue, with leather inserts in white, red, and green as another nod to the patrol’s aircraft. The biggest change is of course the addition of an anemometer on the dashboard, which works with the external Pitot tube to shows air speed and make you feel like Tom Cruise in Top Gun.

Would You Splash The Cash On This Green Pagani Huayra BC? | Carscoops

Meet The Picasso PS-01: A New Supercar From Switzerland