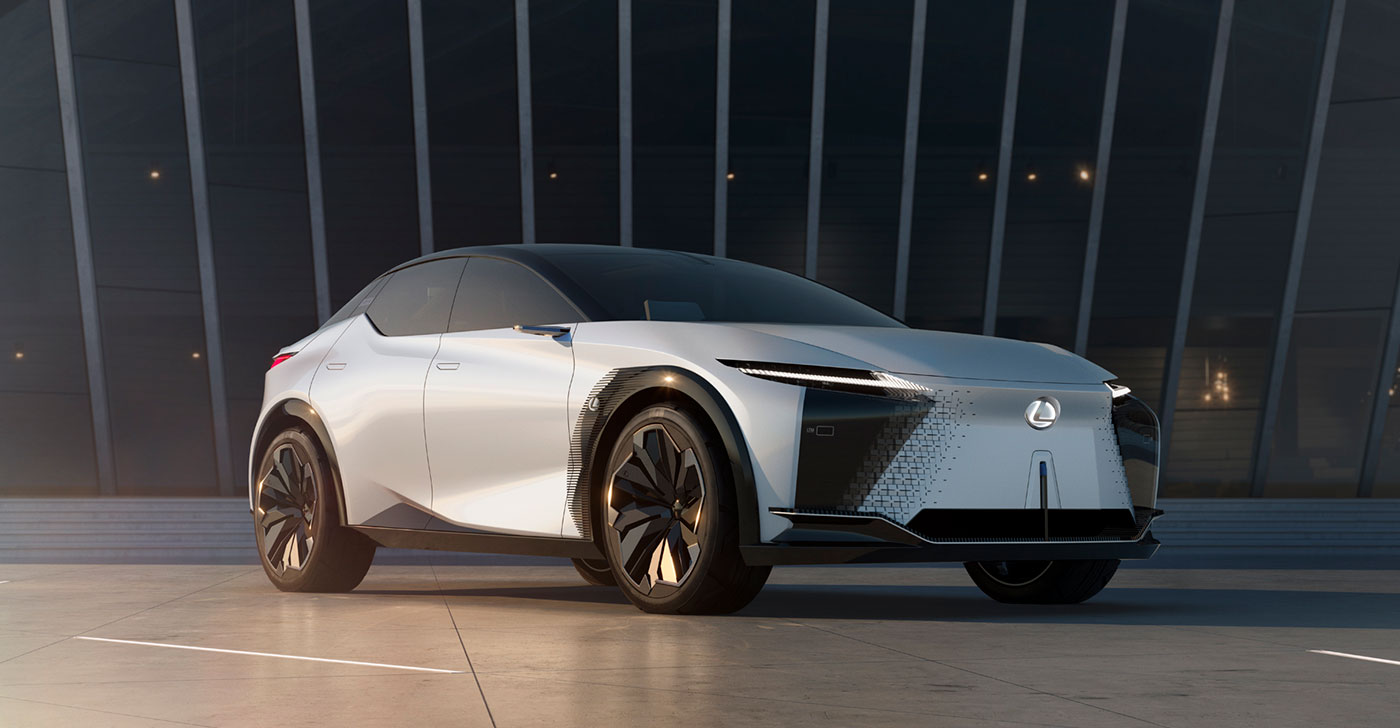 Lexus is redefining their brand and pushing forward with an accelerated electrification plan, marking the occasion with the LF-Z concept. Through this new vehicle, we can glimpse into the brand’s future and forecast their next moves.

There are two specific paths to follow with the LF-Z: the DIRECT4 four-wheel EV technology, and the crossover coupe shape. Both signal something new to Lexus, and together they make for a bold course adjustment. There were hints of this direction with the 2019 LF-30 concept, but the LF-Z has a production-ready look that likely foretells an upcoming new model.

For now, here is the full text from today’s press release, alongside all the images of the latest Lexus concept.

The LF-Z Electrified is a BEV concept vehicle that is symbolic of Lexus’s brand transformation and incorporates driving performance, styling, and advanced technology set to be realized by 2025.

To realize the significant evolution of basic vehicle performance using electrification technology, which is the aim of Lexus’s “Lexus Electrified” electrification vision, the LF-Z Electrified adopts a BEV-dedicated platform. It features a new four-wheel driving force control technology known as “DIRECT4”, which uses the instant responsiveness of an electric motor’s driving force to freely control a vehicle’s four wheels for superior and highly flexible driving performance that sets it apart from conventional vehicles. By fusing the electrification technologies and vehicle motion control technologies it has long cultivated, Lexus aims to evolve driving performance in a way that better connects the driver with their vehicle.

To provide a uniquely BEV driving experience, the interior is equipped with a “Tazuna” cockpit and features an open and minimalist design. The interior embodies an elevated level of Lexus’s human centered approach, an ethos that has been a foundation of the Lexus-brand since 1989.

Also, through dialogue with the driver and based on having learned the driver’s preferences and behavioral traits, AI, acting as a lifestyle concierge, proposes routes and restaurant reservations, among others. By enhancing safety and security along the way, AI enriches the mobility experience.

The LF-Z Electrified evolves the “Lexus Driving Signature,” a unique Lexus driving experience that aims for a linear response that is faithful to the driver’s intentions, including the feeling of seamlessly connecting deceleration, steering and acceleration in all driving situations. The LF-Z Electrified achieves an ideal balance and inertia by optimally positioning the battery and motors. The electrification technology allows for innovative packaging and design, and raises the Lexus Driving Signature to an even higher level by significantly evolving the basic performance of the vehicle.

By orienting the battery assembly longitudinally under the floor of the vehicle, the chassis becomes more rigid and the vehicle’s center of gravity is lowered for improved dynamics. In addition, this design helps mitigate vibrations and unpleasant noises from penetrating the passenger cabin. The Lexus DNA of quietness and ride comfort has evolved dramatically yet remains.

The new four-wheel drive force control technology, DIRECT4, allows the drive force of the high-torque motors to be controlled freely, enabling the vehicle’s posture to be finely controlled according to human senses and inputs. In addition, by controlling the front and rear drive wheels independently, the system can provide the appropriate drive system – e.g. front-wheel drive, rear-wheel drive, or all-wheel drive – for each driving situation. The system controls the distribution of driving force through the seamless orchestration and calculation of accelerator pedal application and steering wheel operation, resulting in powerful acceleration and exhilarating cornering performance that aligns near-perfectly to the driver’s will.

The use of steer-by-wire eliminates the need for a mechanical connection through the steering shaft, resulting in a more direct response between steering operation and driving force. This enables the vehicle to turn with less steering angle – and more precision – in response to driving conditions.

The LF-Z Electrified, as a study model that suggests the direction of the evolution of Lexus styling, aims for a simple and captivating shape rooted in strong proportions and a distinctive appearance. Specifically, the overall form, which starts low in the front and peaks toward the rear, as suggestive of a BEV, is composed of a continuous silhouette centered on a smooth cabin. Large-diameter wheels that transmit the power of the high-power electric motors to the road surface are situated as much as possible at the vehicle’s four corners for a wide stance with a low center of gravity.

Lexus has taken up the challenge of evolving the Lexus design icon of the spindle shape into a spindle body as the overall body architecture in a new form of expression. The aim was to create a three-dimensional design that transforms the form of the vehicle body itself into the icon of the Lexus brand and to continuously develop functional expressions and styling that keep abreast with the evolution of technology.

The use of DIRECT4, which freely controls the driving force of the four wheels, enabled styling that evokes the image of dynamic driving in which the distribution of driving force is linearly shifted. The accentuation of the doors fluently transitions from the front wheels to the rear wheels, which are surrounded by shiny, projecting, flare-shaped molding.

In the rear, a clean and simple horizontal design combines with the molding that emphasizes the projecting wheels to express a powerful stance in support of a torque-strong driving force. Also, horizontally displaying “LEXUS” in the continuous slender rear combination lamp contributes to styling that, along with the front of the vehicle, symbolizes the next generation of Lexus.

To embody to an even higher degree Lexus’s human-centered approach, which has been the foundation of the Lexus-brand since its birth, the cockpit was designed based on the new concept of “Tazuna” (“tazuna” is Japanese for “rein”). Inspired by the relationship between horse and rider, who communicate through a single rein, steering wheel-mounted switches and the vehicle’s head-up display have been highly coordinated to create a space in which various functions, such as the navigation system, audio system, and driving mode selection, can be performed while concentrating on driving and without movement of the driver’s line of sight or need to operate complicated switches.

While the cockpit is a key focal point, the low positioning of the instrument panel relative to the vehicle occupants and other measures are used to express a refreshing minimalism and a space that offers true Omotenashi.

The entire interior has been made a clean and high-quality space by a form that seamlessly connects the cowl to the front doors and on to the rear doors. Also, a panoramic roof uses long plates of glass that bring about a feeling of openness, emphasizing the minimalist environment.

While the augmented reality head-up display, gauges, touch display, and other information-provision functions are grouped into a single module, driving system functions are concentrated around the steering wheel. This suggests the direction of next-generation Lexus interior styling, with expanded forward visibility and the driver being naturally invited to look forward.

In the LF-Z Electrified, Artificial Intelligence (AI), which learns the driver’s preferences and behavioral characteristics, provides constant support to the driver. Voice communication contributes to improved operability while driving. The voice recognition system uses the latest AI to recognize, learn, and adapt to a driver’s habits and preferences, supporting with tasks such as determining driving routes and making restaurant reservations. Such interactivity between AI and driver leads to a fruitful dialogue, thus improving the overall ownership and driving experience, adding color to the customer’s life as a lifestyle concierge.

The use of a digital key allows family and friends to access the car without having to hand over a conventional key, in addition to operating the vehicle with a smartphone, such as opening and closing the door locks. Also, by enabling service providers to access the car via the digital key, it will be possible to provide vehicle-linked services such as package delivery to the car or car sharing, making life with a car even richer.

The E-Latch system makes door opening and closing smoother and safer. When boarding, the retractable door handle automatically appears above the vehicle’s surface when a driver or passenger approaches with key in hand. The door can be unlocked and opened smoothly by touching the sensor inside the handle. When exiting the vehicle, the door can be opened by pressing the door-opening switch. An added benefit: LF-Z Electrified’s sensors scan the surrounding environment for oncoming and adjacent traffic prior to passenger egress to provide an additional layer of passenger safety.

The panoramic roof, which gives a sense of openness, uses electrochromic glass and is equipped with entertainment functions such as dimming for privacy and shade, or illumination to reflect the passing night sky. In the center of the roof is a touch panel that connects the front and rear seats and is used for communication between passengers. The reclining rear seats are equipped with a massage function, bringing a soothing and peaceful time to all passengers when traveling.

A New Lexus ES Is Coming