An electric Jeep Wrangler concept is coming this spring to Moab

With production of the 2021 Jeep Wrangler 4xe officially underway, now would be a dandy time for America’s classic off-road brand to dip its toe a bit deeper into the electrified waters (not literally, that’d be dangerous). And it seems exactly that is about to happen. Jeep’s new Road Ahead website, which was promoted as part of its Super Bowl advertising push, features a small blurb and video montage of a fully electric Wrangler prototype along with a message that it’s headed to the annual Easter Jeep Safari in Moab, Utah.

Unlike most electric vehicles currently in production, the Wrangler EV doesn’t appear to have a skateboard-style chassis with a large central battery pack. Instead, the video depicts a full perimeter frame with a few battery pack modules affixed to traditional steel frame rails. Naturally there’s a bunch of wiring connecting it all up, and the engine bay looks like it will house an electric motor along with, we presume, a whole bunch of high-tech computerized gear to control the drivetrain. 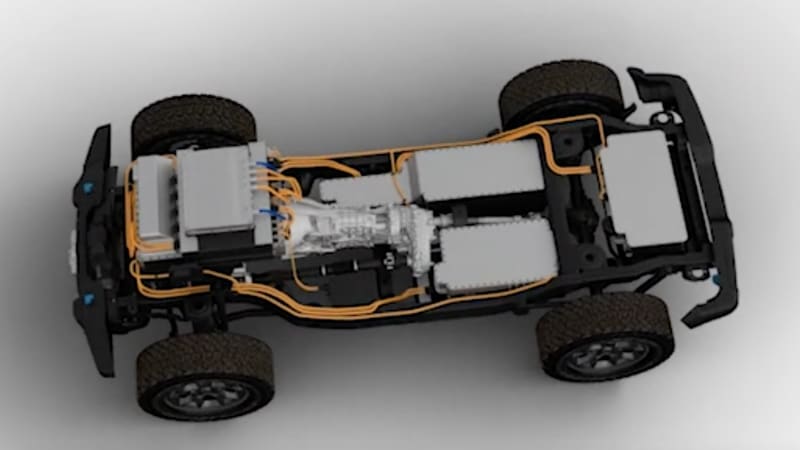 Interestingly, assuming the vehicle displayed here is an accurate representation of the concept that will be brought to Moab, there seems to be a traditional four-wheel-drive layout with some sort of transmission and a transfer case that splits the power and sends it through two driveshafts to solid front and rear axles. We wonder if the concept will keep that arrangement or instead rely on separate electric motors to power the front and rear independently. We also look forward to finding out the battery capacity if it does indeed use more than one pack.

Now would be a good time to remember that Jeep has been working on electrified vehicles for quite some time. Way back in 2008, long before the 4xe was unveiled, the automaker showed off an electric Wrangler that relied on a range-extending gasoline engine. And about a year ago, Jeep President Christian Meunier hinted that an electric adventure machine would be “the most capable Jeep ever.“

Jeep is also planning to install solar-powered charging stations at various Jeep-centric locations around the country. The Road Ahead website includes Moab on the list of Jeep Badge of Honor trails, so it wouldn’t be a stretch to expect a demonstration to go along with the electric Wrangler this spring. And considering the fact that the Gladiator is based on the same basic underpinnings as the Wrangler, we have to wonder if the truck will also get an electric variant at a later date.