We recently spent a weekend with the Ford Mustang Mach-E and asked our readers if they had any questions.

They sure did as we received over 50 questions on a variety of subjects ranging from range to whether or not the Mach-E is really a Mustang. We’ll start there and answer a handful of other questions along the way. 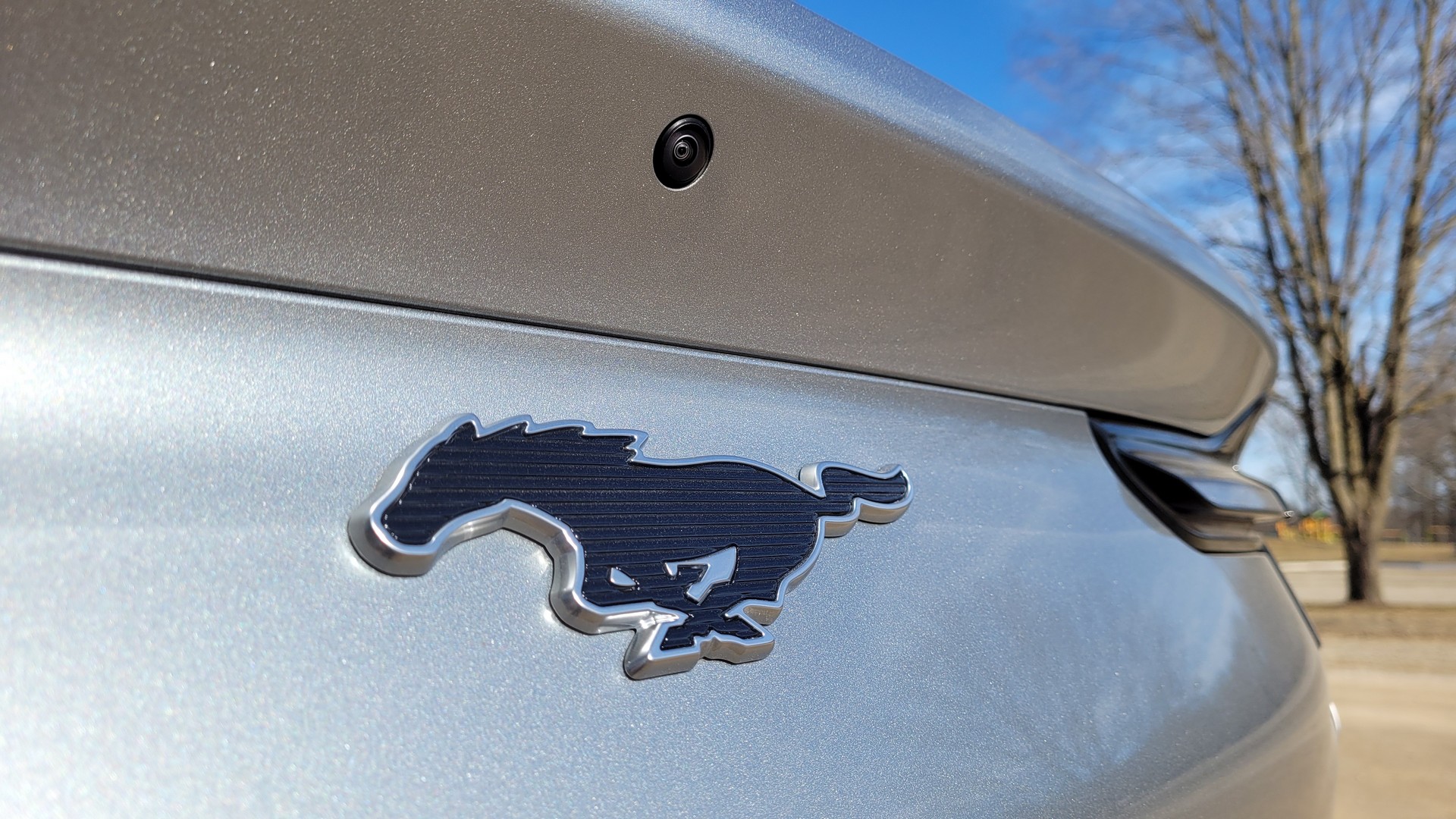 The simple answer is no. While there are plenty of Mustang design cues and pony badges, tacking on the Mustang moniker doesn’t magically turn a crossover into a coupe.

However, if you’re being more philosophical, then you can kind of see the connection. Stripping away a Mustang to its bare essentials, you have a rear-wheel drive vehicle that looks good, is desirable and obtainable, and offers a variety of powertrains ranging from mild to wild.

Both the Mustang and Mustang Mach-E fit that bill, so it’s more about capturing the idea of what a Mustang is, rather than trying to replicate the same experience in a crossover. That being said, the Mach-E is quick and can be fun on the right roads. However, it’s more geared towards comfort and that’s probably the right call.

Can It Go The Distance? 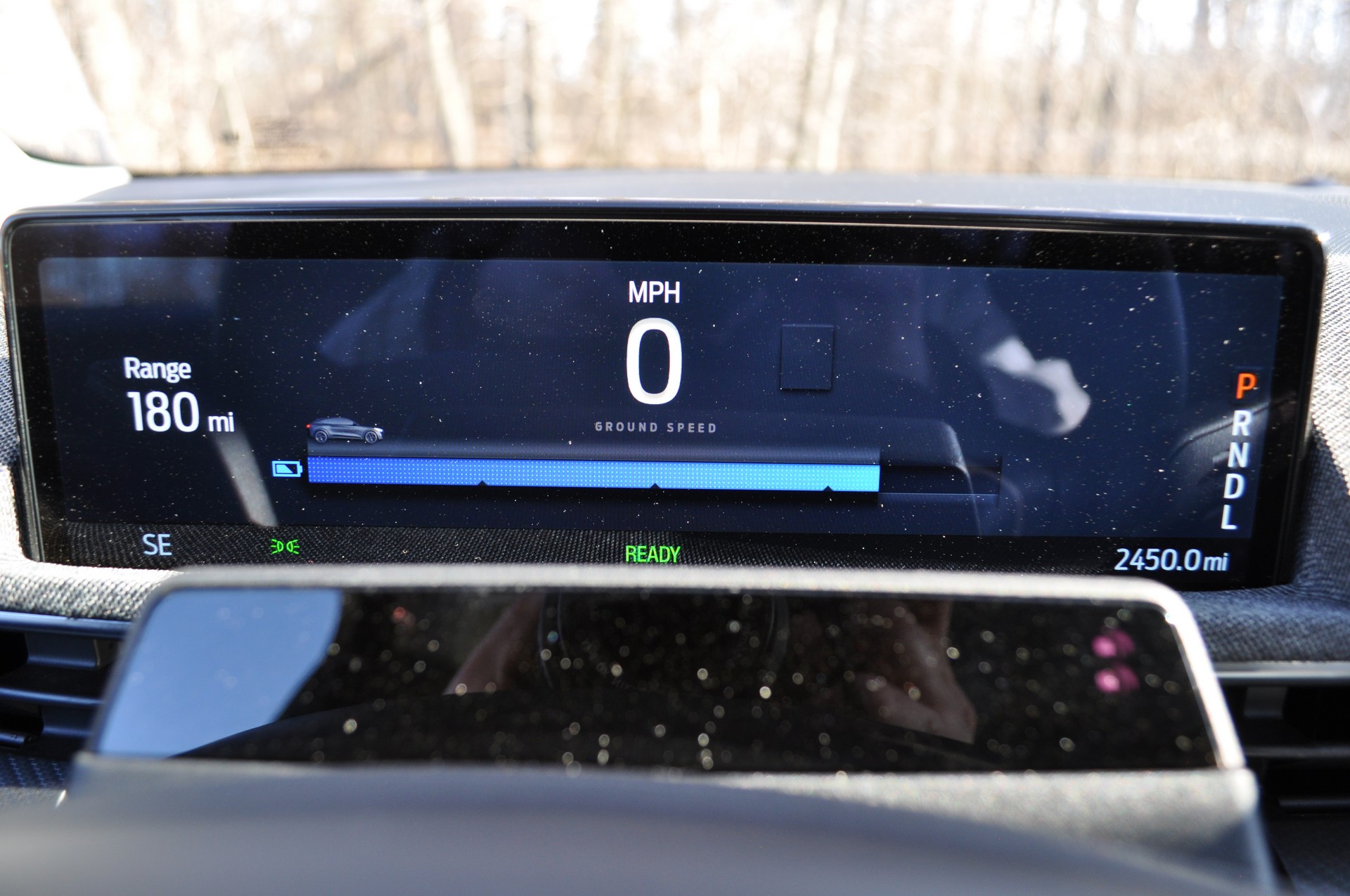 Since the Mustang Mach-E is electric, a number of people asked about its real-world range. This is a bit tricky as range is affected by a variety of factors including temperature, driving style and climate control settings, among other things.

Our tester was an all-wheel drive Mach-E Premium with the extended range battery, which has an EPA-estimated range of 270 miles (435 km). However, we saw much lower real-world estimated ranges of between 213-238 miles (343-383 km).

Those numbers can be attributed to cold weather that saw temperatures dip below freezing. While seeing an estimated range of 213 miles (343 km) was a bit surprising, it’s important to note the average American drives less than 30 miles (48 km) a day. So even at that range, the Mach-E could last a week without charging. 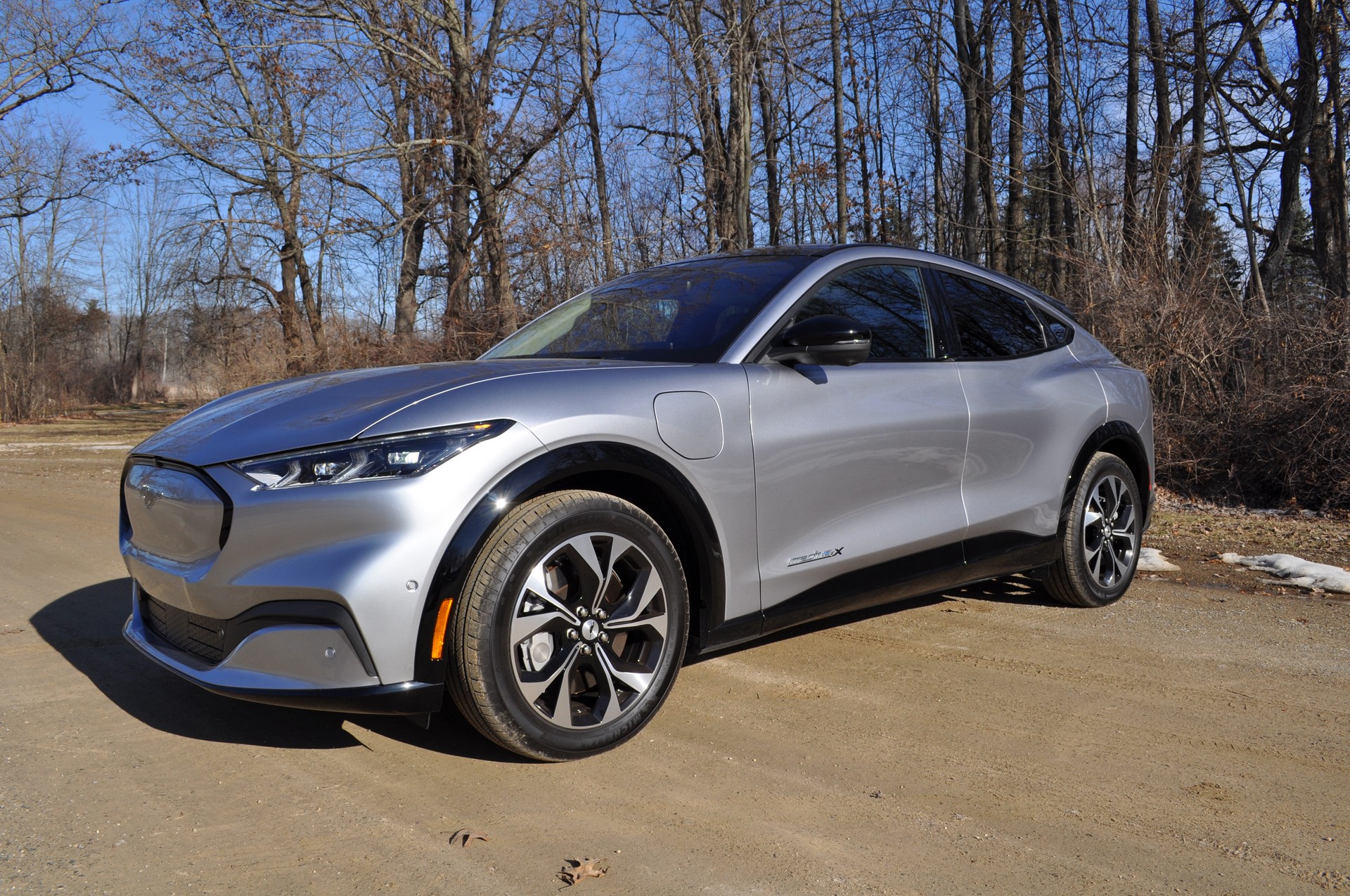 The thing to remember when discussing EVs and range, is how far do you typically travel? For me, my longest trips – aside from road tests – are usually less than 45 miles (72 km) one way. There will be longer trips here and there, but those are relatively rare.

Think of range as the automotive equivalent of the fear of missing out. Most people don’t drive very far, but they’re afraid they might ‘miss out’ by not being able to travel long distances without recharging. Bottom line, if you don’t drive far very often, range isn’t much of an issue. 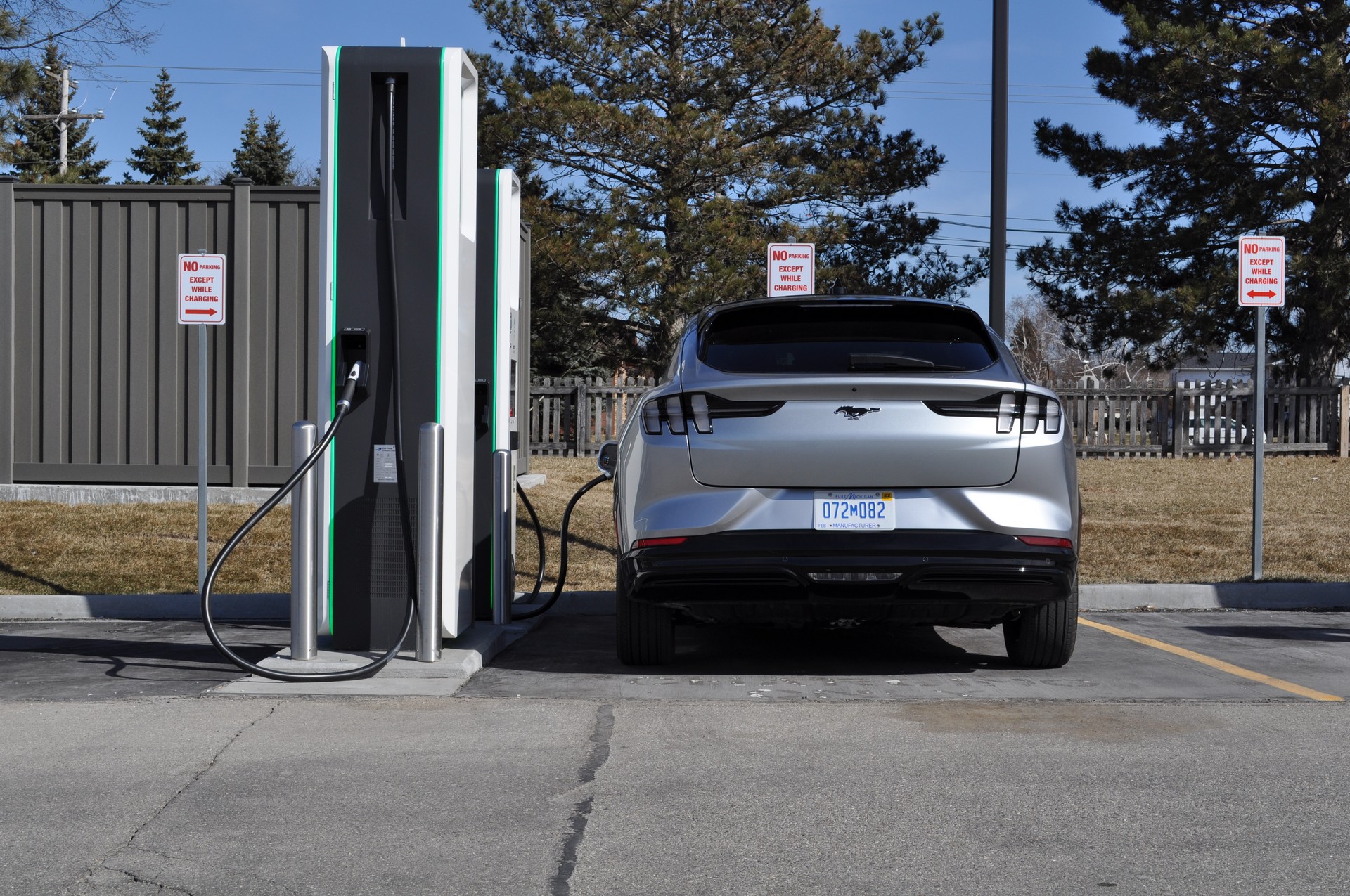 A number of people asked about charging and it’s pretty straightforward. At home, I just hit a button on my Level 2 charger, open the charging port door and plug in. That’s it, nothing special and the whole process takes a matter of seconds.

You can monitor the charging process via the FordPass app, which tells you the current battery charge, current estimated range and when charging will be completed. The app also shows how long the charger has been connected, how much range has been added and how much energy has been used to charge the vehicle.

Your experience at DC fast charging stations will vary, but the Mach-E comes with access to the FordPass Charging Network. It consists of more than 13,500 public charging stations and simplifies billing so you don’t have to sign up for multiple charging networks. 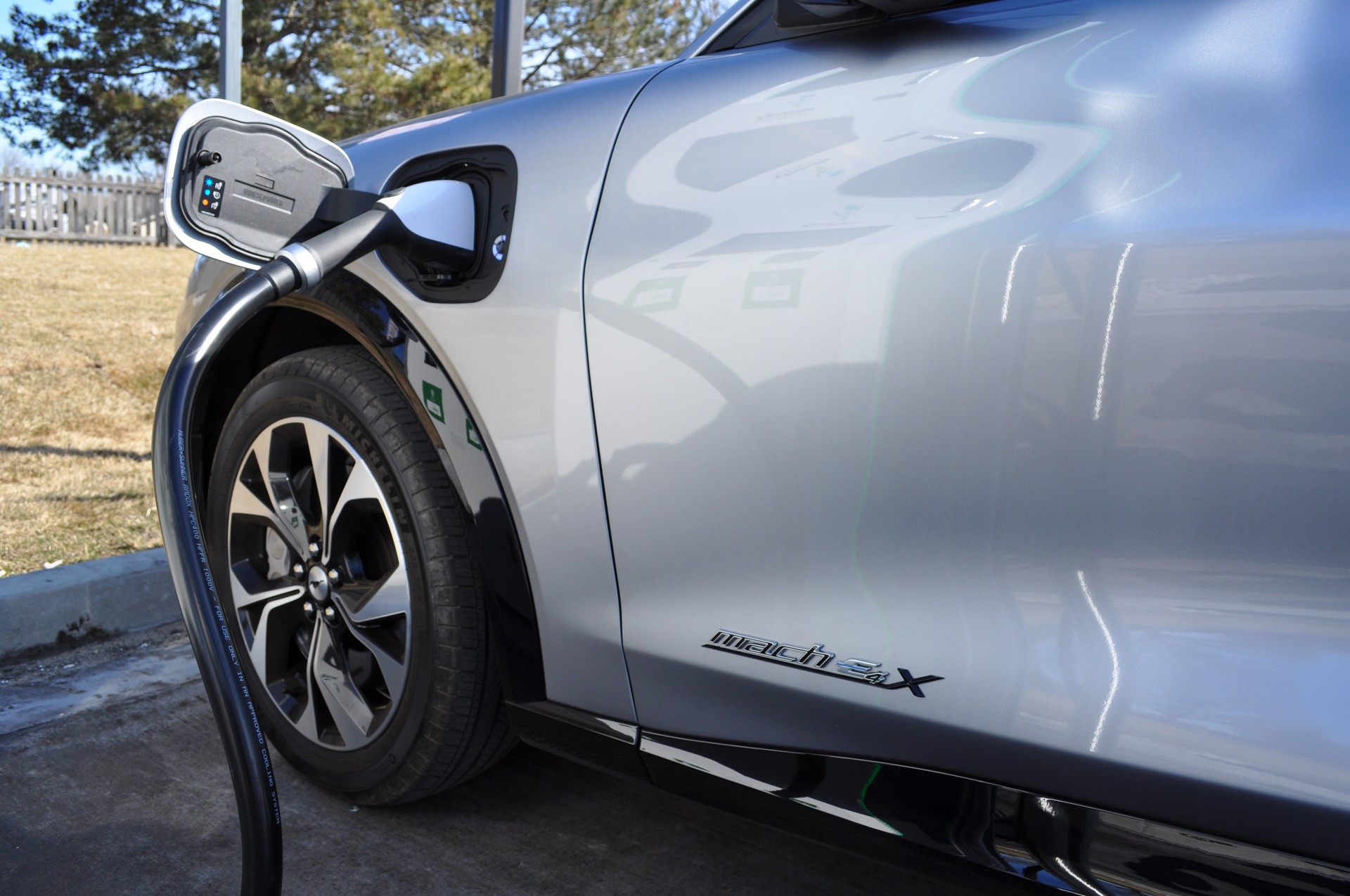 The Mach-E also has a Plug & Charge capability at Electrify America stations, which makes recharging as simple as plugging in and tapping a few buttons on the screen. Billing is automatically handled after an initial one-time setup, so there’s no messing around with cards or anything.

It’s also important to note DC fast chargers have different capabilities, so you’ll want to find one that can make the most of the Mach-E’s charging capability of up to 150 kW. I recharged at a 350 kW Electrify America charger and got 34 kWh in a little over 28 minutes.

That’s not too shabby, but Ford says that “using Electrify America’s DC fast chargers, rear-wheel-drive-equipped Mustang Mach-E with an extended-range battery can add an estimated 61 miles (98 km) of range in approximately 10 minutes.” This is way more than our all-wheel drive extended-range tester received as we only got around 27 miles (43 km) of range after 10 minutes.

Blackbird41 and Egg Enthusiast Wanted To Know About Visibility 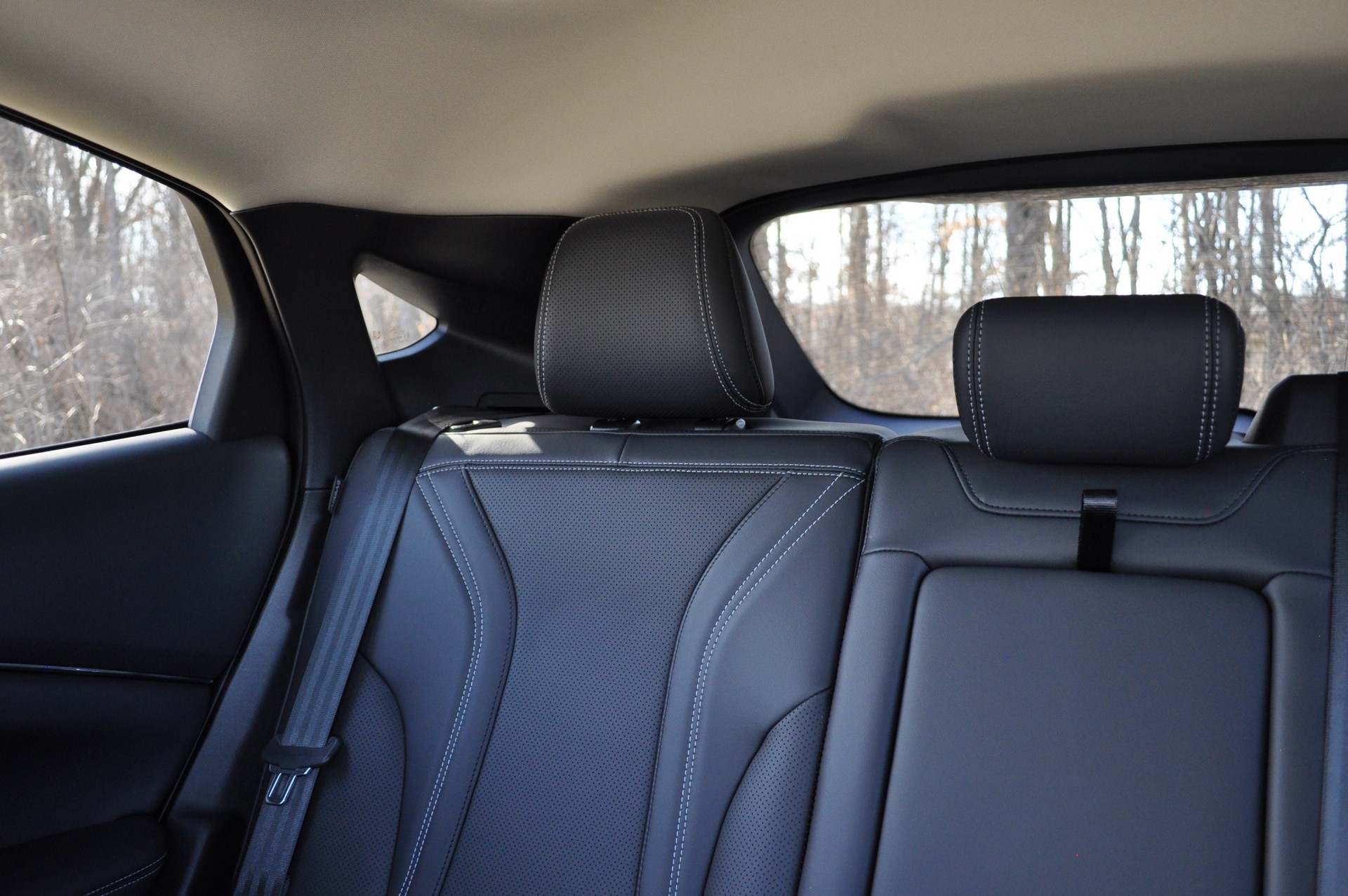 On top of that, the Mach-E’s massive infotainment system shows two camera views at the same time. This allows you to easily check the rearview camera and surround view camera with a quick glance.

Needless to say, the model also comes with an assortment of driver assistance systems including reverse brake assist, a reverse sensing system and a blind spot information system with cross traffic alert.

Joe Kope And Others Asked About The Infotainment System

The 15.5-inch SYNC 4 infotainment system stands out in the otherwise minimalist interior. It’s relatively easy to use and isn’t distracting.

It’s broken up into three sections, with the bottom third dedicated to climate controls that are always visible. The middle section is a bit like a browser tab display as it provides basic information about ‘pages’ such as navigation, phone and audio settings. Click on one and it will pull up that ‘page’ on the top section of the infotainment system.

Overall, it works pretty good and only has a minor learning curve. Most of the time it’s reasonably quick as it only takes a few seconds to pull up displays. It’s not smartphone fast, but it’s not exactly slow either.

How About Long Distance Trips? 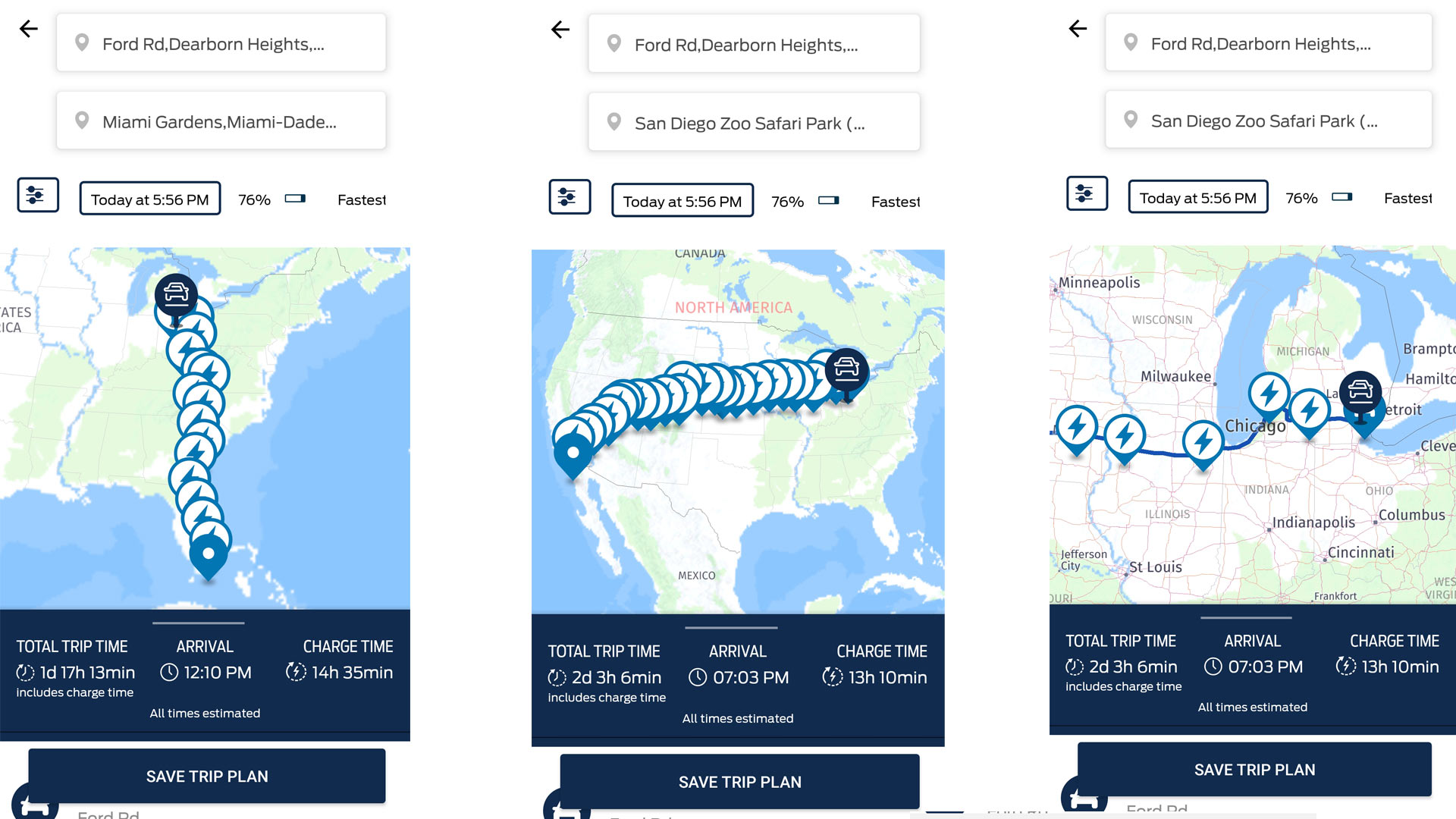 I plotted two mock trips starting in Dearborn Heights, Michigan and going to the San Diego Zoo in California and Miami Gardens in Florida starting with a 76 percent charge.

The Model Y has the advantage, but I goofed when plotting the Mach-E trips as I didn’t have a fully charged battery at the time. As a result, the Mach-E journeys would be quicker than the numbers suggest. However, you can compare your own mock trips with planners from Ford and Tesla to get a rough comparison. 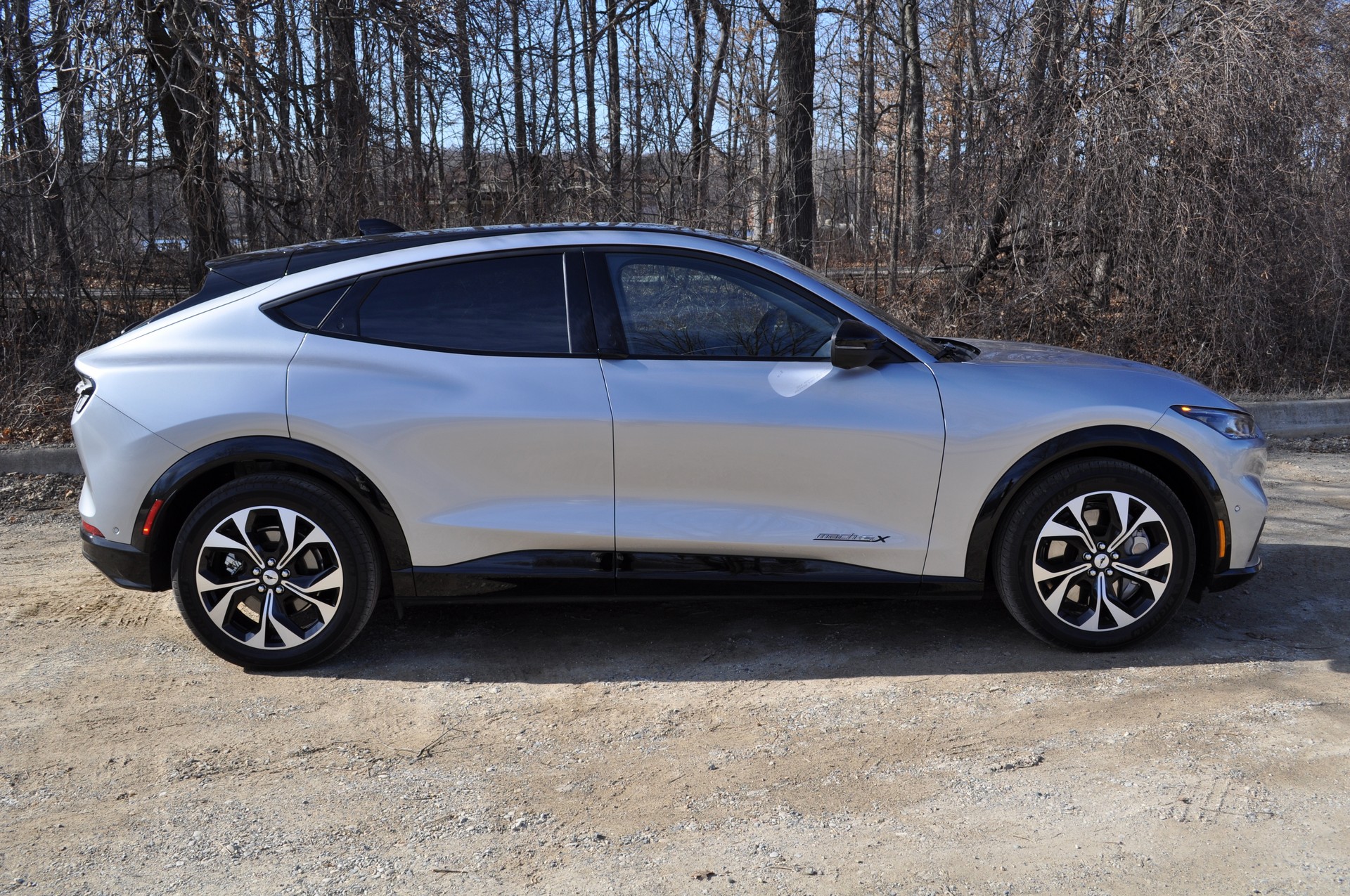 I think so. Some of the biggest challenges facing EV adoption have been solved or are getting solved. Many modern electric vehicles can travel more than 250 miles (402 km) on a single charge and that largely eliminates range anxiety. On top of that, charging infrastructure has improved and will continue to do so as a number of companies are expanding their charging networks.

Furthermore, some EVs are starting to adopt 800V technology and faster DC charging capabilities. This helps reduce time spent at charging stations on long distance trips, which is currently one of the biggest downsides of electric vehicles.

That being said, challenges remain as many homes aren’t setup for electric vehicles and this means buyers will need to shell out extra to get a 240V outlet installed in their garage. EVs are also relatively expensive, but tax credits help to somewhat offset their added cost.

It’s also nice to see automakers getting serious about EVs. Not that long ago, many electric vehicles were boring and felt like compliance cars. That’s no longer the case as we’re starting to see interesting designs as well as a variety of different body styles.  This should help to get more people interested in electric vehicles and, judging by the number of people who to stopped to ask questions about the Mach-E, it’s working.

Those are just some of the answers to the questions you asked, and you can learn more about the Mach-E by reading our review here. 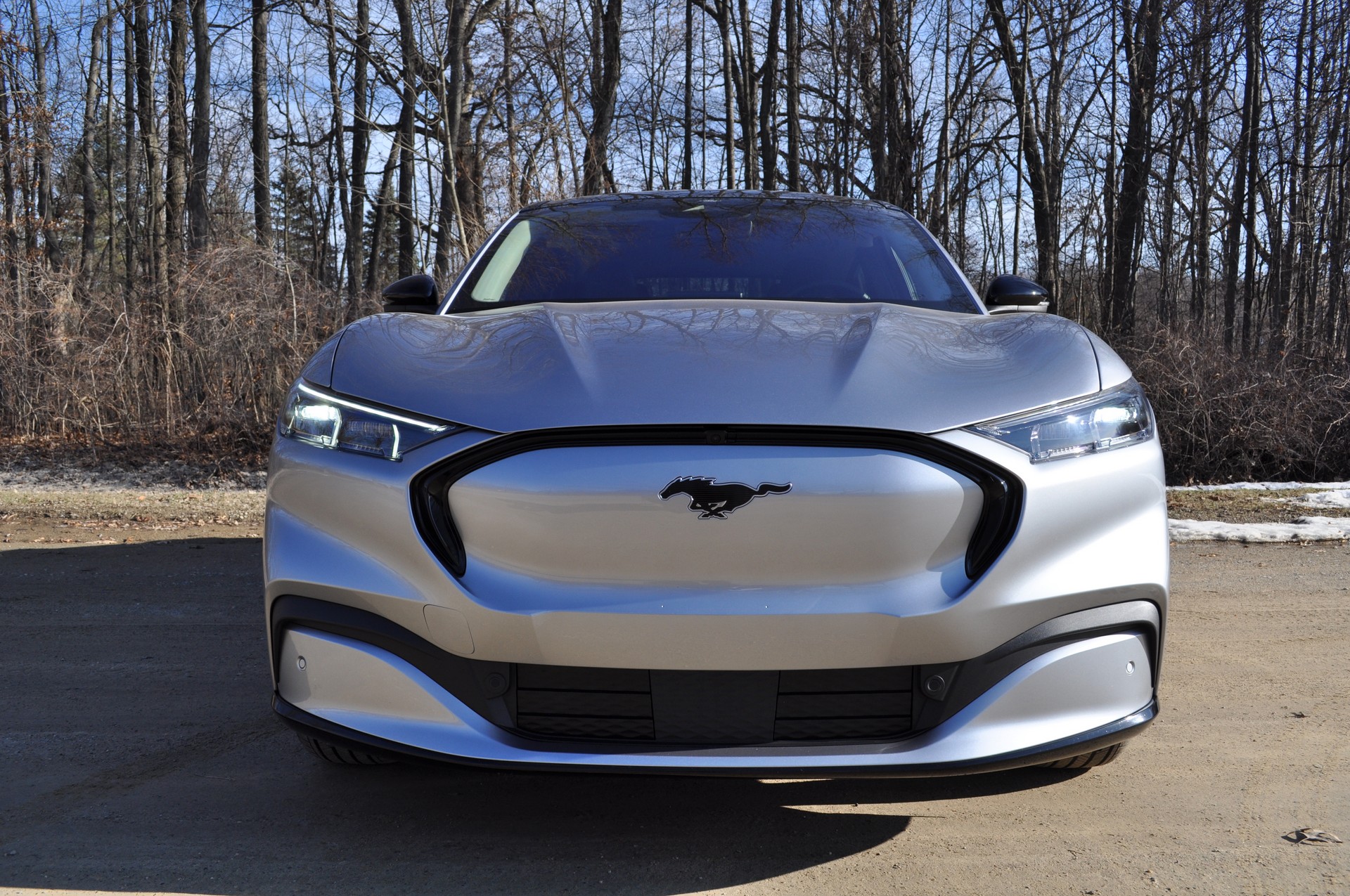 This Is A Superb Affordable Ford F-150 Raptor Alternative