The 2021 Chevrolet Silverado 1500 is a solid truck with a lot of capability that earn it a wide fan base. But when Chevy redesigned this full-size pickup for 2019, it played it conservative, while arch-rivals Ford and Ram have been swinging for the fences. As a result, the Silverado stands in the shadow of its domestic-brand competitors. While its strong capability, diverse powertrain lineup and generous infotainment offerings provide more than enough competence to satisfy the needs of full-size pickup buyers, those seeking a truck that consistently goes that extra mile would be wise to check out those rivals.

The 2021 Chevy Silverado 1500 gets a new Multi-Flex tailgate (pictured in the gallery below), which is essentially a tailgate-within-a-tailgate that offers multiple functions including a work surface, a step, and an extension of the load surface. It is effectively Chevrolet’s version of GMC’s MultiPro tailgate, and the two are functionally identical. Other big news for 2021 is that towing capacities for the 2.7-liter turbo-four and the Duramax 3.0-liter turbodiesel have been increased. The trailering totals vary by configuration, but most trucks with the diesel engine are now rated to tow an additional 1,900 pounds, while the 2.7-liter adds as much as 2,500 pounds to the tow rating.

Still on the subject of towing, the Silverado’s lane-change camera now has a trailer-length indicator. When reversing with a trailer, the truck can now alert the driver of a potential jack-knife situation. There’s also a new cargo-bed view for the rear camera, which also provides hitch guidance. These camera elements are shown in the gallery below.

The Realtree Edition returns for 2021, and essentially adds tree-themed graphics to the Custom Trail Boss trim. Elsewhere, wireless Apple CarPlay and Android Auto are newly available, as are adaptive dampers on the fancy Silverado High Country. Finally, some options are re-priced, most notably the Duramax diesel engine, which is now $1,500 cheaper.

The Chevrolet Silverado’s cabin is its least compelling and competitive attribute, trailing far behind the Ram 1500 and Ford F-150 is terms of design appeal and materials quality. And while the range-topping High Country is certainly fancier than the lower trims, it doesn’t approach the luxury and ambiance of competitors’ high-dollar trucks.

The in-cab technology is competitive, however. The 7-inch touchscreen definitely is on the small side, but it’s user friendly and includes Apple CarPlay and Android Auto. Buyers can upgrade to an 8-inch display with navigation, but that’s still on the small side compared to giant units offered by Ford and Ram. Also available is the wireless smartphone connectivity, a nice convenience, and wireless smartphone charging. We recommend the Technology Package, which brings a 360-degree-view camera (a must for parking this big rig), a head-up display, a rear camera mirror, and a bed-view camera. There are even more camera views available (15 total), many designed for trailer towing that are step above what’s offered by Ram and Ford. The neatest is the “transparent trailer” view that stiches together a view of the road behind you.

How big is the Silverado?

It’s huge. But so are all full-size pickups today. There are three cab configurations: two-door Regular Cab with an 8-foot bed, a Double Cab with four doors and a 6.5-foot bed, and the larger Crew Cab four-door with either a 6.5-foot or a 5.8-foot bed. The Regular Cab measures 229.5 inches from stem to stern, while the Double Cab and the Crew Cab short box are just two inches longer, and the Crew Cab long box tacks on another 10 inches.

The Silverado features higher bed sides than most competitors, allowing Chevy to claim greater cargo volume. Payload ranges from 2,130 pounds for the 4×4 Crew Cab to 2,280 for the 4×2 Regular Cab. Buyers who would routinely max out the payload, however, should look instead at the Silverado HD.

The vast majority of Silverados sold are the four-door Crew Cab configuration, which has sprawl-out space in the rear seat. The rear seat cushion also can flip up to help when carrying cargo inside. Access is easy through huge doors, although it’s a climb up to get inside (more so on the off-road-themed variants with their raised suspensions). The Double Cab is less spacious, and its rear seatback is more upright. The Double Cab’s narrow rear doors are a clue that its back seat is meant for occasional use, but at least they’re front-hinged rather than an awkward clamshell design.

What are the Silverado fuel economy and performance specs?

The Silverado has a sprawling powertrain lineup with five engines, three transmissions and of course 2WD and 4WD. As a result, performance and fuel economy vary widely.

The 4.3-liter V6 is the base offering in the Work Truck and in the Custom Trail Boss. It gets a six-speed automatic. EPA estimates are 17 mpg combined with either 2WD or 4WD in all trims but the Trail Boss, which gets 16 mpg combined.

From there, the upgrades are diverse starting with the Silverado's unique 2.7-liter turbocharged inline-four, which produces 310 hp and 348 lb-ft of torque. Paired with an eight-speed automatic, it’s the standard powerplant in most of the mid-range trims and an optional upgrade for the base WT and the Custom. Fuel economy considerably tops the base V6 with 21 mpg combined (2WD) and 20 mpg combined (4WD)

The most economical setup, though, is the 3.0-liter turbodiesel, which carries exceptional EPA estimates of 27 mpg combined with 2WD and 24 mpg combined with 4WD. The diesel produces 277 horsepower and 460 lb-ft of torque — the latter figure matching that of the largest V8.

Nearly every Silverado trim level is available with a 5.3-liter V8 good for 355 hp and 383 lb-ft of torque. Fuel economy varies widely, however, as the engine can be paired with six-, eight- or 10-speed automatic transmissions as well as differing versions of cylinder deactivation – Active Fuel Management can shut down half the cylinders to save fuel, whereas the more advanced Dynamic Fuel Management can shut down any number of them. The result is fuel economy that ranges from  economy ranges from 15 mpg combined for a Trail Boss with the six-speed automatic to 19 mpg combined with either 4WD/10-speed or 2WD/8-speed combos. That's a significant spread.

As you can tell from the huge number of drivetrains and trims levels, there are a lot of answers to this question. But we have driven many different versions. We spent some time in a 5.3-liter Trail Boss, and found the engine paired well with the eight-speed automatic. An off-road stint in the Trail Boss showcased its mud-slogging capabilities, although those come at a cost to on-road comfort. We also towed a heavy load with a different Silverado powered by the big 6.2-liter and found that it did feel stronger than the 5.3-liter truck, but that you don't strictly need it. The 5.3 is more than capable.

We found the turbocharged four-cylinder to be as beefy and efficient as advertised, easily assuaging concerns that you can't put a four-cylinder in a full-size truck. Still, we think that it represents questionable value relative Ford's small turbo V6 and Ram's mild-hybrid V8. We found the new Duramax diesel engine to be strong, impressively quiet and would be the best choice if you're looking to save on fuel. Keep in mind, though, that your savings at the pump will be dependent on where you live: in many areas, the price of diesel is significantly higher than that of gasoline, diminishing the savings.

Regardless of engine, we've been impressed with the Silverado's road holding and steering. Despite its size, the Silverado is not ponderous to drive. Handling is actually fairly responsive, and it feels more nimble than its rival trucks. The ride quality is a sore spot, however. The LT Double Cab we tested bounded nautically over bumps, while other trims with bigger wheels produce tiresome impact harshness, and there’s some rear axle hop when the bed is unloaded. The top-spec High Country now comes with adaptive dampers that should smooth out the ride at least somewhat, but expect the Ram and F-150 to ride better regardless of version.

What other Chevrolet Silverado reviews can I read?

Here's our most comprehensive review of the Silverado when fitted with the Duramax diesel engine. This review covers a few key variations of the Silverado: the modestly equipped but volume-selling LT trim, the extended Double Cab, and the unique 2.7-liter turbocharged four-cylinder engine. You can also read more about the four-cylinder's engineering in our Silverado 2.7L RST first drive review. We take the most off-road-oriented Silverado 1500 off-road, finding it to be plenty capable but with a few compromises. 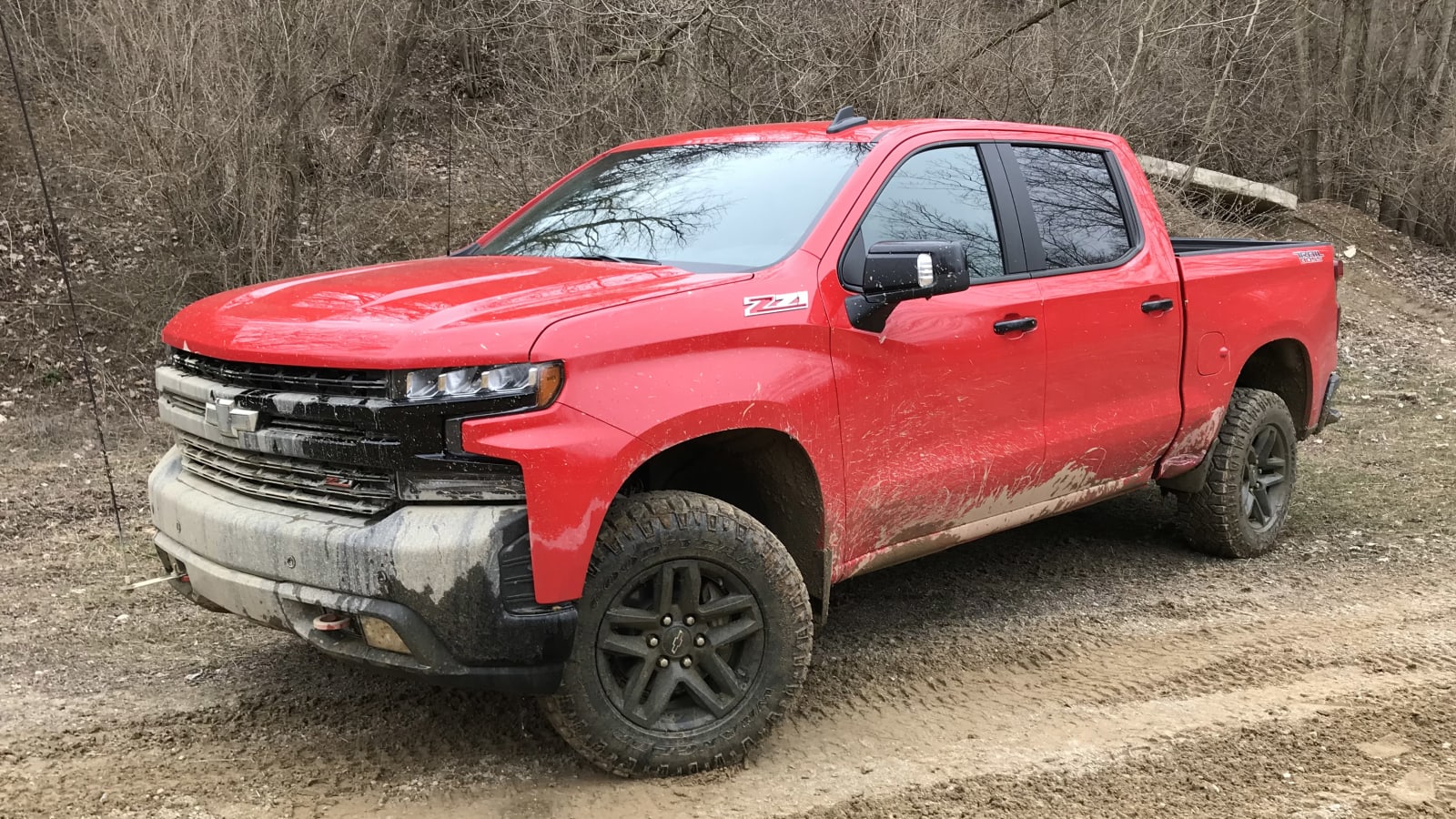 Here is our more comprehensive review of the 5.3- and 6.2-liter V8 engines, including while towing. We also provide in-depth details about the new Silverado's overall engineering and design.

How much is the 2021 Silverado price and what features are available?

Pricing starts at $30,995 for a regular cab Work Truck, including a $1,695 destination charge. Even that trim includes automatic headlights, power windows and locks (Double and Crew cabs), a rearview camera, a 7-inch touchscreen, Apple CarPlay and Android Auto. The base engine is the 4.3-liter V6. However, it also has vinyl seats and flooring, so consumers are most likely to start with the more civil Custom ($38,195), which bypasses the regular cab and adds basics amenities such as alloy wheels, cloth upholstery, carpeting, cruise control and alloy wheels. It also upgrades to the 2.7-liter turbo-four as the standard engine.

The LTZ, at $49,350, and the High Country, $55,595, are the luxury trim levels. Although they certainly slather on the equipment, we've found their interiors to not be luxurious enough in look, feel or quality to warrant their lofty price points. They are nowhere close to what you'd get in Ram and Ford's various luxury trims.

What are the Silverado safety ratings and driver assistance features?

Chevy charges extra for driver-assist features that should be standard — and are elsewhere. Forward collision warning, low-speed automatic emergency braking and lane-keeping assist are optional on most trim levels. Blind-spot and rear cross-traffic warning are standard on the LTZ and High Country and optional elsewhere.

The good news is that the Insurance Institute for Highway Safety gave the Silverado’s optional crash avoidance and mitigation system an overall score of Superior (the best rating). Both headlight systems — those in the lower trims and the LEDs in the upper grades — were deemed "Poor," however, and the child seat LATCH anchors got a second-worst "Marginal" score for ease of use. In IIHS crash tests, the Silverado Crew Cab got the best possible score of "Good" in all but the "small overlap front: passenger side" test where it got a "Marginal" score. The Double Cab has not been crash tested by the IIHS. In NHTSA crash tests, the Silverado earn a four-star rating overall (out of five), with four stars for front and rollover crash protection and five stars for side-impact crashworthiness.

Now Is A Great Time To Buy The Chevy Colorado

As EV Sales Continue To Rise, Tesla Remains Far Ahead Of Rivals